The last few months have been a bit of a whirlwind, with starting a new job and a bunch of travel and Wi-Fi events!  So I thought I’d cover what I have been up to for the past couple of months, and what has me excited about Wi-Fi as we near the end of 2018.

I thoroughly enjoyed attending CWNP Wi-Fi Trek in 2017, and when it was announced this year’s event would be held in San Diego I booked my flights and registered as soon as I could!  I love visiting San Diego, as there are so many things to do and the weather is (usually) great.  Beaches, hiking, great restaurants and bars, breweries, concerts (got to enjoy Clutch & System of a Down again while in town) to name a few. 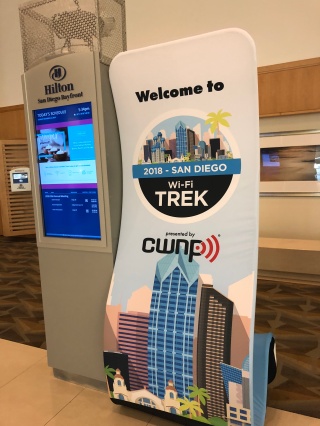 Peter Mackenzie (@MackenzieWiFi) delivers a fantastic CWAP class, and given the revised study guide & exam were due out at Wi-Fi Trek I decided to sit his bootcamp again.  It is wonderful to revisit the fundamentals and also spark new ideas while hearing the experiences of fellow classmates.  It is definitely a popular class with it selling out!

I also wanted to challenge myself and try for a presenter slot at the conference, and I was lucky to be selected to present about Wi-Fi Calling.  A/V issues aside I enjoyed getting up on stage and discussing this topic with several hundred of my peers, and I received some great feedback from members of the audience which I really appreciated.

EDIT: Recording of the presentation is now live!

There were some fantastic speakers at the event, and I look forward to the videos being released.  Highlights for me were:

It was a great week of Wi-Fi knowledge sharing and education, and being able to catch up with friends and meet some new ones.

Earlier in the year I was invited to present for Mobility Brazil Conference by Gustavo Mastroianni (@gugamastroianni) the week after Wi-Fi Trek.  I have presented remotely numerous times via web conference, whether it be for product demos, tender responses, live training, webinars; however this was the first time I had remotely presented at a conference!

There was a fantastic lineup of speakers, most who had also presented the week before at Wi-Fi Trek, and I received some great questions from the audience.  I applaud Flavio, Gustavo & the team behind organising the event, as well as the audience given English isn’t their first language.

When I was working with Ekahau I approached Jussi (@JussiKiviniemi) with the idea of bringing Ekahau Wi-Fi Design Day to the Asia-Pacific region and expanding outside of London.  The market is in need of targeted Wi-Fi education events, and Australia was a logical choice (given the size of the market in-region and that I am based there).  So I set about scouting venues and pulling together an agenda and ideas for speakers.

The audience were also treated to a fantastic lineup of speakers including Jussi, my esteemed colleague and Wi-Fi Evangelist Mark Krischer (@mkrisch), Matt Fowler from Mist, Aaron Scott (@wifidownunder) from Aruba (Nicholas Cage may or may not have made an appearance), Jim Steinbacher from WatchGuard, and the grandfather of Wi-Fi  & CWNE#3 – Keith Parsons (@KeithRParsons).

It was a great day of networking and knowledge-sharing, and again awesome to be able to catch up with old friends and meet new faces.

I was fortunate to be invited to participate in a discussion panel, along with Jussi, Keith, Aaron, Matt, & Jim; to cover topics around WPA3, 802.11ax, 802.11ad, troubleshooting clients, LTE-U, 6GHz, and design.

Which leads me to the next three sections rounding out this blog post as we discussed some of latest advancements and announcements in Wi-Fi.  Here is what has me excited for the future of Wi-Fi.

Shortly before Wi-Fi Trek the FCC announced it would allow over 1GHz of spectrum to be utilised by unlicensed applications, including Wi-Fi.  You can read more about the announcement here and also keep an eye out for the recording of Chuck Lukaszewski’s presentation at Wi-Fi Trek.

The audience at Wi-Fi Design Day asked questions around LTE-U imposing on Wi-Fi, as well as adoption and benefits of 6GHz for Wi-Fi.  My view is that LTE-U won’t be a real threat to Wi-Fi in 5GHz, as most testing has shut down and Jussi made a good point that LTE-LAA is becoming favourable.  Unlike LTE-U, LTE-LAA uses a listen-before-talk (LBT) protocol similar to that of Wi-Fi to help coexistence with Wi-Fi.

With the news of 6GHz for unlicensed use it gives various protocols more ground to play and coexist in, while I feel will be beneficial across the board.

The challenge is the waiting game.  The FCC is the only regulatory domain to have announced 6GHz to be available for unlicensed use.  Yes, other countries and regions will likely follow suit, however it is going to take a long time for the IEEE, Wi-Fi Alliance, and chipset & Wi-Fi vendors to adopt usage of 6GHz.  I’m hoping we see an amendment to 802.11ax to allow operation in 6GHz, perhaps around 2021-2022.

The question came up around timeframes and client support for 802.11ax, and the panelists agreed that until the likes of Apple & Google provide support in iOS and Android devices; it will take a while for 802.11ax adoption to ramp up.

I re-iterated the naming of the 802.11ax PHY layer specification is HEW – High Efficiency Wireless.  While increased throughput may be a benefit realised through improved efficiencies, the goal is at efficiently maximising the use of channels and airtime with multiple clients.  OFDMA should help us realise benefits touted previously by MU-MIMO.

I won’t go into the details of 802.11ax, I have listed plenty of great references in an earlier post; however the idea of individual, or groups, of Resource Units (RUs) utilising individual smaller subcarriers sparked a thought:

Each transmission of an RU, both downlink and uplink, will employ MCS rates and hence RSSI & SNR individual to that RU within a channel.

During the panel discussion at Wi-Fi Design Day I mentioned I am excited to see where location-based services (LBS) will go with 802.11ax and theoretically being able to receive a greater number of more accurate RSSI values from client devices thanks to RUs and subcarriers.

Digging deeper I found there is an amendment currently being worked on called 802.11az Next Generation Positioning.  How cool!

Essentially it is intended to make use of the Fine Timing Measurement (FTM) protocol we heard about being support in Android Pie with Wi-Fi RTT.  It is also designed to take advantage of the subcarriers in 802.11ax, as well as being compatible with 802.11n, 802.11ac and 802.11ad/ay!

I am eager to hear how LBS will improve with this new protocol, though its finalisation is dependent on the other amendments mentioned above being completed; and is predicted to be finalised itself around 2021.

So what’s left in 2018?  Well I am off to Tokyo next week to get the deep lowdown on the latest and greatest innovations from Cisco in the enterprise networking space – namely what is being worked on with 802.11ax, WPA3, and new wireless infrastructure.

If you are attending the Cisco Partner Summit  in Las Vegas (or virtually) you will find out some of these details.  Keep an eye out for public product announcements in the coming weeks!

Lastly, on November 15th the website for the Wireless LAN Professionals Conference (WLPC) in Phoenix will go live, and we will get to see the list of bootcamps, deep dives, and presentations that made the cut! Keep an eye out on Twitter @wirelesslanpros .